Botnets in 2017 – Everything You Need to Know 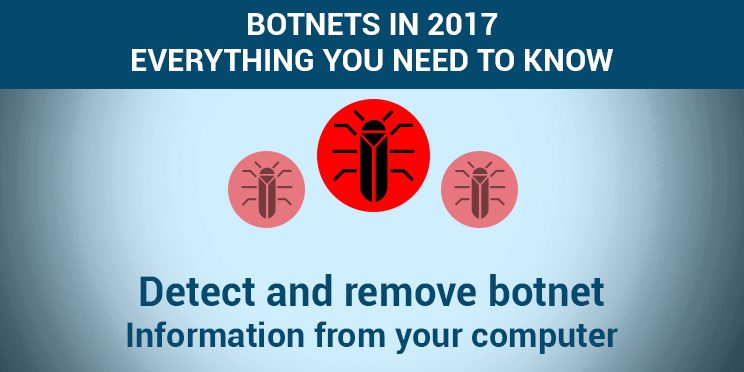 Just when you started to think you knew everything there is to know about cyber safety; enter the botnets. These creatures are affecting individuals and businesses alike.  For example, brands find themselves spending exorbitant amounts of money on digital ads served to fake audiences. Media specialists are debating the role of this technology in the US elections of 2016. As cybersecurity evolves, so do cyber threats. One of the predominant cyber threat is Botnets. They are plaguing private web users by hacking into their IPs and connecting them to a network of cyber fraud.

Why Managed IT Security Services Company?

Here’s everything you need to learn about botnets and how to protect yourself against them.

What is a Botnet?

Simply put, a botnet is a collection of private computers that form part of a network without even realizing it. Cyber fraudsters hack into the IP of private users and collectively controls these computers remotely. From this vantage point, cyber criminals can perform several fraudulent actions without being traced. In short, they use your IP to do their dirty work.

While computer hacking has always been around, nothing compares to the scale of fraudulent activity that can be performed with botnets.

In 2017 we’ve seen an increase in these types of cybercrimes, and it’s becoming harder to identify & locate these fraudsters before it’s too late.

How Do Botnets Work and Who Do They Target?

So why would a botnet target you?

The fact is, any moderate internet user is easy prey for botnet fraudsters. They want people who have active social media accounts and perform their banking online.

Why? Because they want as much information about you as they can get. Once you become part of a botnet, criminals have free range to:

So if you’re wondering who the target is, it’s you.

We all perform most of our personal tasks online. When our computers are breached through botnet tactics, fraudsters get access to every aspect of your online presence. Worst of all, they do this from a remote server, so finding out where they are is extremely difficult.

Anti-malware is starting to sound like a good idea, isn’t it?

Consequences of Not Protecting Your PC

When the obvious threats like internet viruses are taken care of, remember that there are other ways to breach your personal computer.

Fortunately for all of us, cybersecurity companies have developed anti-malware that’s tailored for combatting botnet tactics.

But first, you must find out if you’re already an unwilling part of a botnet.

Are You Part of a Botnet?

To find out whether you are part of a botnet you will have to fight fire with fire. Since the threat is digital, you will have to use digital means to identify and mitigate the problem. The easiest way to do this is to get anti-malware software. This software will immediately identify a problem once you integrate it into your computer.

Once you know that the problem exists, you can use that same software to sever your connection with the botnet.

If the anti-malware you have isn’t equipped to handle such a task, you may need to consult an IT technician for assistance. These experts will use software to identify the problem and will take measures to free you from those evil botnets.

How Bad is the Problem? – Shocking Twitter Botnet Controversy

When it comes to the internet, popularity equals sales. When a particular account gets multiple followers (say on Twitter), it provides an opportunity to sell to those individuals.

But if you have a bunch of fake accounts you’re selling to, advertisers are essentially paying to advertise to… no one!

So the hosts of popular Twitter accounts or Facebook pages get paid, but the advertisers don’t get the exposure they were really paying for.

To give you an idea of how severe this botnet problem has become, let’s talk about Twitter.

At the start of 2017, it was discovered that there were over 350 000 Twitter accounts that were unauthentic. These accounts were all part of one (yes, one) network. Other accounts which were part of smaller networks were also found, bringing the total of fake accounts to over half a million.

This may sound like a funny story, but it’s actually quite serious. With that many fake accounts, botnet operators have been generating false popularity for various Twitter accounts.

This has done some serious damage to Twitter’s reputation. The idea of advertising on a platform where adequate policing isn’t done will be unattractive to many.

Why advertise if we’re potentially advertising to no one, right?

Why Has This Become a Controversy

As I said, Twitter’s reputation is an at stake. They claim to have measures in place that detect bots and delete or bar those accounts from any activity.

But to miss over half a million fake Twitter accounts? Something clearly needs to be done.

Dr. Zou, a UCL lecturer who was a part of the research that detected these botnets, admitted that they are unsure of who was behind this massive operation, or of what they wanted to accomplish.

The opportunity for cybercrime is huge if someone is able to gain control of this many IPs. Banking details and social media accounts are left vulnerable. It’s a scary thought.

Suffice to say that all identified fake accounts on Twitter have since been dealt with accordingly.

Knowing is Half the Battle

Now that you know what botnets are and how invasive they can be, it’s up to you to take steps to prevent it. Platforms like Facebook and Twitter rely on users like you and me to report suspicious activity that might suggest cyber fraud.
At home, we would all do well to ensure the protection of our PCs. The problem is a fairly new one, but it’s one we can combat if we have the knowledge to do so.
If you want to learn more about botnets or other cybersecurity threats, please subscribe to our blog.