It’s finally time for airlines to band together to update their IT systems. 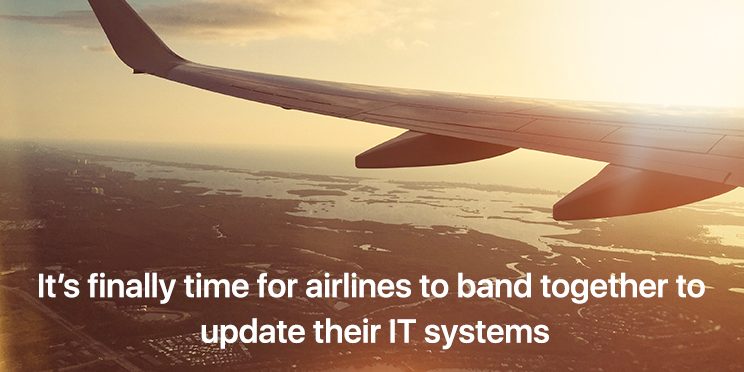 Grounded flights and stranded passengers: It’s finally time for airlines to band together to update their IT systems.

The latest was just this past week as a power surge in one of British Airlines’ data centers caused the airline to cancel 75,000 flights over a busy three-day UK bank holiday weekend. The exact cost to the business is surely in the tens of millions of dollars, if not higher, and the company’s YouGov Brand Index score a measurement of consumers’ perception of the brand has dropped more than 10 percentage points since the crisis.

Already this year, Delta, United, ExpressJet, JetBlue, American, Sabre one of the largest IT suppliers for airlines the U.S. Department of Homeland Security and several airports all experienced computer glitches that either grounded or delayed flights.

There’s no doubt that computer glitches cost the airline industry billions of dollars in lost revenue and pose a significant risk to the businesses’ reputation among an increasingly-frustrated consumer base.

So, why does this keep happening? And why hasn’t the airline industry taken steps to prevent outages from happening?

The answer to the first question is easy. Airline technology infrastructure is based on 30-year-old systems built on mainframe architectures. Since then, they’ve been patched together way beyond their expected lifespan. The systems are also incredibly complex. Reservation, ticketing, scheduling, routing and frequent-flyer programming all need to be tightly integrated and made accessible to tens of thousands of representatives at airport ticketing counters, in call centers and online. These systems also need to be inter operable with security software maintained by customs, immigration, and national security agencies.

If that’s not enough, new digital marketing technology has completely upped the complexity. Instead of offering consistent pricing, airlines can now track each individual consumer and plug all sorts of information about that person into an algorithm that tells the airline how much she is able or willing to spend on airfare. The mountain of data that goes into running the airline industry is absolutely staggering, and it’s all running on 1970s mainframe technology.

The answer to the second question is that the airline industry lacks the courage to invest in new software even if that investment would result in billions of dollars in savings over the lifetime of the technology.

Most public companies airlines included are focused on short-term profits that benefit stock holders rather than invest in long-term solutions that may not pay off for years if not decades down the line.

Earlier this month, I published a list of seven keys for building exceptional software infrastructure. Making sure that your critical software works within short-term budgets and scales to long-term needs was number one. Unfortunately, the airline industry is ignoring this important principle, putting short term profits ahead of long-term sustainability. And travelers are suffering.

The problem is that it would take tens of millions of dollars if not hundreds of millions of dollars to correct decades of neglect. I outlined the complexity involved above, and some estimates peg the cost of upgrading airline systems at half a billion dollars. Make no mistake, though, someone is going to make this investment. A vendor with deep pockets like IBM or Accenture could develop the software and then charge airlines tens of millions of dollars in licensing fees. Airlines themselves could pony up but again, we’ve already made the case that executives are more focused on short-term profits and are unlikely to invest half a billion dollars in a solution.

Instead of going alone, airlines should create an alliance of carriers to pool resources to develop an industry standard solution one that would be engineered for today’s requirements and be flexible and adaptable to handle future needs.

Members would contribute a set amount of research and development budget as well as the expertise to get this done as quickly and as efficiently as possible. Systems could leverage the flexibility and scale of the cloud, and make integrated passenger, carrier, routing and reservation information accessible to millions of airline representatives around the world. It would also be easier to integrate third-party systems such as security and travel agents.

Sharing the investment costs would spread the risk associated with this massive expenditure among dozens of carriers, making it more palpable to executives and shareholders. Governments may even want to get involved as air travel efficiency and the processes of moving people and goods from one place to another have such a big effect on the economy and national security.

There are even precedents for this type of alliance. As travelers demanded flexibility in frequent-flyer programs, airlines formed One World and Star Alliance allowing members to use mileage on partner carriers. Why couldn’t carriers from a global IT alliance to finally develop a solution to these IT glitches?

As recent PR crises have shown us, travelers are tired of being treated like cattle. Airlines need to make a concerted effort to upgrade their IT systems to create efficiencies, increase integrations and reduce outages that result in canceled flights and stranded passengers. Current systems have been in place for 30 years. It’s time for airlines to band together and share the cost of making things right.