Lessons from the past: Will Walmart become the next Blockbuster Video? 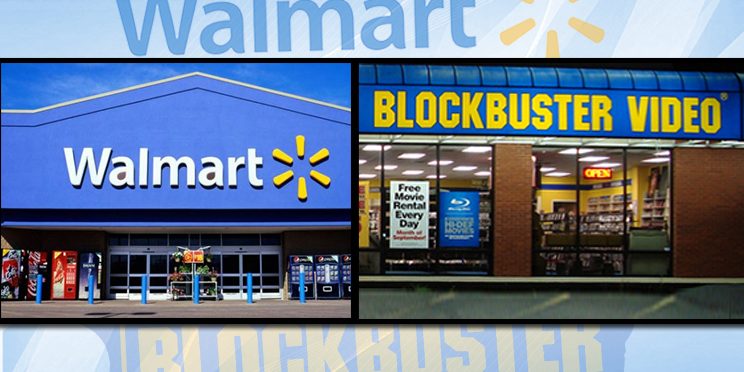 Every business has a make or breaks moment. Markets change, new technology is developed, regulatory conditions evolve. At some point, a company must make a decision that will allow it to evolve and flourish or do nothing and flounder. Walmart, squeezed by nimble digital disruptors like Amazon, is at such a moment and must decide whether it wants to evolve with the market or attempt to stay the course.

History is littered with examples of major brands missing an opportunity to evolve.

Eastman Kodak developed the first digital camera prototype in 1975 but passed on its promise because it chose to protect the huge monopoly it had on print photography—from the paper photographs were printed on to the chemicals used in the development process. Within a few decades, digital technology completely disrupted the photography industry and Kodak filed for bankruptcy in 2011.

Blockbuster Video had a similar misstep when it failed to see the impact that streaming video would have on its business. In the early 2000s, the company had an opportunity to acquire Netflix for $50 million but declined. Taking advantage of improving internet bandwidth, Netflix has since completely revolutionized the way we watch movies and TV shows while Blockbuster was forced to cease operations in 2013.

Led by Hollywood bigwig Terry Semmel in 2002, Yahoo! made a low ball offer of $3 billion to purchase a young upstart with promising search technology called Google. The “kids” at Google declined, recognizing the huge market opportunity in search advertising. Instead of upping its offer, Yahoo! decided to develop its own technology, badly bungling the rollout. Today, Google’s market cap is nearing $700 billion while Yahoo! continues to retool in a seemingly never-ending cycle to reinvent itself.

Walmart is finding itself in a similar position as digital transformation and automation disrupt traditional models. Retail has gone online as rising consumer expectations require retailers to provide a robust yet seamless online shopping experience. Amazon allows its users to search, discover, compare, purchase and receive products in a single day—from electronics to soy milk. The entire process is automated through software that manages inventory, marketing, and shipping. It’s highly efficient and scalable—allowing Amazon to compete on pricing with large retailers that have had decades to streamline supply chains.

A lot of analysts would say that Walmart has already missed the boat and that the time to invest in online retailing was 20 years ago when it had the market-share and the capital. Since then, Walmart has been scrambling to compete online—almost in comical ways.

Just this past week, Walmart announced a pilot program that relies on its brick and mortar employees to fulfill online order deliveries on their way home from work. The extra responsibilities are optional and workers can choose the days they want to make deliveries and the size of the orders they are willing to bring to customers. While noble, the entire process is completely reliant on human processes that affect the consistency of the service offering—including timing and quality. Whereas Amazon customers can expect a certain level of consistency with deliveries, Walmart customers will be subject to the whims of workers’ personal schedules.

The only way that Walmart can compete is by fully embracing digital transformation and software automation. The retailer already has the supply chain and physical infrastructure in place around the country to scale up quickly. All it has to do is convert a select number of its warehouses into dispatch centers that can handle online orders. Perhaps Walmart could partner with FedEx to physically deliver the orders. FedEx would be a good partner due to its commitment to technology and automation throughout its delivery processes. It may be more costly at first, but the technical efficiencies and tracking capabilities that FedEx would bring to the table would give Walmart an important differentiator over Amazon.

History is littered with cautionary tales of market leaders failing to recognize and embrace evolving conditions. Walmart is late to the online retail game, but it’s not too late to switch course and embrace technology, digital-interface, and process automation to meet the growing expectations of today’s consumers. As we’ve seen before, the alternative does not look good.