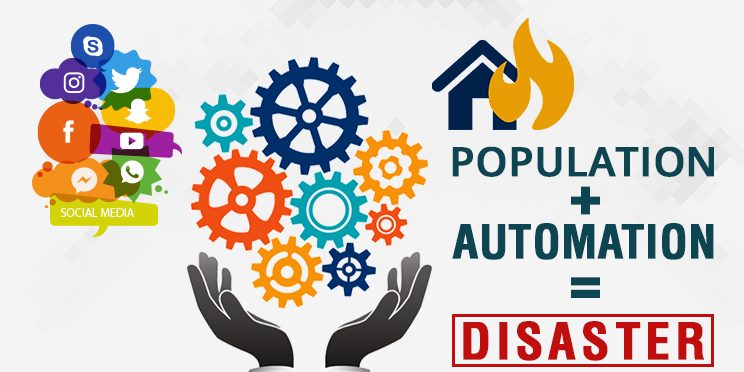 Technology is disruptive. Just about every month or so, a new startup raises millions and declares that it is spending some industry or another. Grocery deliveries, ride hailing services, autonomous cars, and trucks, legal advice on demand they’re all turning traditional markets upside down by changing the way we consume goods and services.

Read between the lines, and you’ll see another trend: automation. New technologies automate much of the manual processes that industry and services have relied upon for decades. These companies are connecting consumers directly with those who are building products or providing services cutting out the middle man who is now without a job.

Just like the agriculture and industrial revolutions caused massive labor disruptions the automation and robotics revolution is set to put hundreds of millions or even billions of people out of work. Estimates vary from 38 percent of all workers per a report by PriceWaterhouseCoopers to 47 percent estimated by an Oxford University study. And it’s not just farm laborers or factory works that will get a pink slip. White collar jobs are being streamlined at a rapid pace, and the studies referenced above predict that automation will essentially wipe out the entire middle class creating a huge vacuum and disparity between the one percent and the rest of humanity.

Compounding this unemployment trend is the unsustainable population growth in many regions of the world. Nigeria’s population grew at an astounding 60 percent rate in the past 20 years. The India, Bangladesh and Pakistan region grew more than 397 percent in the last six decades. Consequently, the global population is expected to peak at 10 billion by 2100.

This is simply unsustainable. With the population exploding and automation eliminating nearly half of the global job market something is going to break. War, famine, economic inequality, an inability to respond to climate change. The world will be in chaos sooner than we think. And it’s not if, but when we start feeling the impact of this disaster.

We need to wake up. Today’s workers are not prepared to take on the new jobs that automation will create. Skills like programming, networking, cyber security and maintaining smart technology (e.g. robotics) will be in high demand, but much of the world’s population does not have those skills or the opportunity to acquire them.

The solution is two-fold:

1) The population growth rate must level off, and

Back in the 1970s, the Communist Party in China recognized that massive population growth was unsustainable. While its methods were universally deemed unpleasant, it’s hard to argue with the results. As a consequence of its One Child Policy, China was able to reduce its expected population by 400 million over 30 years and elevated 12 to 20 million people out of poverty every year during that time. China went from a mainly agricultural society to an industrial powerhouse to a service-based economy in just a few decades and will soon surpass the U.S. as the world’s largest economy.

The One-Child Policy could only work in a tightly regulated, autocratic nation and that’s a non-starter for the rest of the world. Awareness rather than force could stop the population explosion in a voluntary, altruistic way. Educational campaigns could be established and run by philanthropic NGOs supported by the United Nations. Information about the consequences of over-population would be spread, showing the importance of sustaining or reducing our current birth rates. Family planning services could be offered to the developing world and made more accessible in the West. Eventually, population growth might be tamed.

There’s precedent for this type of progress. A combination of government regulations and educational campaigns reduced the use of aerosol sprays in the 1980s and saved the ozone layer. Two decades later, Al Gore’s film An Inconvenient Truth nearly single-handedly magnified a niche industry into the fast-growing and powerful green lobby in the U.S. This just goes to show that well-crafted educational and marketing campaigns that capture the attention of everyday people have worked in the past and can again.

The Future of Work

Once population growth is at a sustainable level, millions of displaced workers need to find jobs in the new economy. The solution needs to be a cooperation between government and the private sector.

The first step is to rethink how we educate citizens and completely rebuild our education systems. Unfortunately, today the U.S., U.K. and most of the world’s education systems are in disarray, still geared toward preparing workers for the industrial age. Same goes for India, Pakistan and many African countries that inherited the British system from years of colonialism. A focus should be on STEM subjects Science, Technology, Engineering and Math and vocational education need to be rolled out in mass, giving our children the technical skills they’ll need to work in a highly-automated, technologically advanced society. The ability to code is going to be absolutely essential. Everyone, from small business owners to office workers to creatives to homemakers to senior citizens, is going to need some sort of programming abilities much in the way that driving is a necessary skill today.

Germany has a wonderful vocation education system where aptitude is carefully tracked and students at the high school level are funneled into schools that teach them a specific skill including robotics and software engineering. Revolutionizing our education systems on a global scale is going to take the money and political will in much of the world. Change is never easy, but our survival as a species and our place on this planet depends on it.

Secondly, money needs to pour into retraining programs in every region of the world. Workers doing manual labor and jobs that automation has replaced the need to be given the skills to transition to another field. Field workers became industrial workers. Blacksmiths became mechanics. It’s time for factory line technicians to become robotics experts and computer software, developers. This is where the private sector needs to come in. The Fortune 500 has never been so cash rich as automation has cut operational costs while expanding markets. The increased margins have created a huge cash flow that is just sitting in corporate coffers or being funneled to stock holders.

Why not invest a portion of that money into training the next generation of workers? Corporations are going to need highly-skilled employees, and they can’t afford to wait for the government takes the lead especially in this age of austerity. Again, there’s precedent for this type of corporate responsibility. Henry Ford famously paid his assembly-line workers higher salaries so they could afford to buy his cars. In essence, he created the American middle class a group that made him exceptionally rich in the long run.

We can’t afford to wait any longer to take action. Population explosion and the loss of up to 47 percent of the world’s jobs is a recipe for disaster. Governments, non-profits, and the private sector need to get together and slow population growth through awareness campaigns and work to retain the next generation of workers with the skills they’ll need to survive in a highly-automated world.